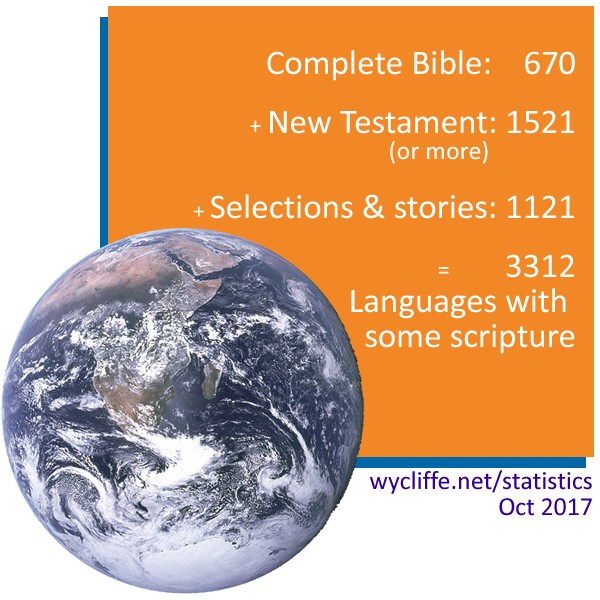 The Wycliffe Global Alliance have just released the updated statistics for Bible translation around the world.

The headline figures are that there are now 670 languages with a complete Bible (up from 636 last year) and there is a potential need for translation into a further 1,636 languages which currently have no translation or translation project.

There are lots of other numbers and explanatory text on the statistics page, so it is worth taking a look if you are interested in this sort of thing.

Something I found fascinating was the FAQ page, which gives all sorts of background information on how the statistics were compiled.

I was particularly struck by one particular question and answer:

3. What is a Scripture portion?

A Scripture portion is sometimes defined differently across the various organisations and communities involved with Bible translation. We now include a wider range of initial products such as Scripture from within a book, or a selection of Scripture portions from across several books. This would be the case with a publication focusing on the Christmas or Easter stories, or selections focusing on specific Biblical characters such as Abraham, Moses, and Joseph.

The question is a very good one, but I’m not sure that the answer fully gets to grips with it. As I understand it, a Scripture portion is any publication that tells a story from the Bible. At first glance this sounds ok.

Scripture isn’t a series of isolated stories that can be stripped from their context; it is a canon of books which tell a connected story and which can only be fully understood in relationship to each other.

So, what is the smallest indivisible unit of Scripture? I think we can probably agree that a whole Bible is certainly Scripture and individual words, out of context, are not Scripture. We can’t say that “the” is Scripture, simply because it occurs gazillions of times in the Bible.

I’ll admit that talking about individual words is a bit silly, no one is likely to say that they’ve translated a bit of the Bible because they have written down the word “flower” in another language (1 Kings 6:18).

So can we say that a language has Scripture if a verse has been translated? I have a couple of problems with regarding a verse as the minimum unit of Scripture. Firstly, chapters and verses are not intrinsic to the text, they are a relatively modern addition (16th century) and they don’t always reflect the flow and argument of the actual text. Secondly, I’m far from convinced that an isolated verse can actually convey something meaningful if there is no supporting Scripture to give it context.

I would reject the notion of the chapter as a minimal unit of Scripture for similar reasons.

It’s important to remember what I’m talking about here. This isn’t about citing chapters and verses from an English translation. A quote in English (French, Chinese or Swahili) comes from a complete Bible. This post is talking about when all that is available in a particular language is a verse, chapter or what-have-you.

Ultimately, the answer to this question is not found in linguistics or sociology, but in theology. We need to consider Scripture in its own terms as an inspired text. The question can be reframed to ask what is the basic unit of Biblical inspiration? The answer to that is the book; be that Epistle, Gospel, History etc. There are exceptions – the Psalms are individually inspired and I’ve no idea how the book of Proverbs works – but the generalisation holds. God inspired the Bible in big chunks and we should think in these terms when we consider whether or not the Bible is available in a language.

What this means in practice, is that if only the Christmas story is available in a given language, I would not consider that language yet to have Scripture available. There is (presumably) work in progress and some preliminary texts have been circulated, but until the whole of Matthew’s or Luke’s Gospel are available, I would not count this as Scripture.

At this point, you might be asking “so what?”.

My first answer is that Christians (and evangelicals in particular?) tend to think of the Bible in terms of isolated passages, rather than seeing it as a connected, coherent text – and ultimately as a canon. We need to take steps and adopt language that helps us to avoid this tendency and to see the Bible as it really is.

Secondly, I think that a focus on how many languages have just a tiny bit of text available can give a false picture and can lead to premature triumphalism. The Bible is a big book and even if the Christmas story is available, there are still years and years of work to be done before translation is complete. Let’s not pat ourselves on the back too quickly.

Personally, I might be tempted to simplify the statistics a little:

The amount of work that has been done in Bible translation is truly staggering. This year’s statistics represent a whole lot of work by a lot of very clever and very dedicated people. More importantly, the represent God speaking into situations without his voice being muffled by linguistic confusion. It’s brilliant. My concerns are about the way in which we think about the Bible itself and do not question the amazing work which is going on.