I speak French, I’ve lived in France and I’ve spent a lot of time browsing for French magazines to read in airports and railway stations, but I don’t think I’ve ever bought a copy of Charlie Hebdo. It’s just not the sort of thing I’d buy. But I’m glad it’s available and I mourn the death of the cartoonists and journalists in yesterday’s attack.

Described by one commentator as a cross between Private Eye and the Beano, Charlie Hebdo can be unsubtle, controversial and offensive. It also offers a biting critique of people and institutions that need critiquing. Charlie didn’t just offend Muslims, as this cartoon (warning – it might offend you) shows it is pretty much an equal opportunities offender when it comes to religions.

I know that if I read Charlie, I might well be offended by some of its content. So I take the radical step of not buying it. However, I still defend the right of Charlie to publish what they want and perhaps to offend me. After all, I believe and preach some things which many people find offensive. If Charlie can’t poke fun at people like me, then we have no right to tell others that we believe that they are going about their lives in entirely the wrong way. Christianity needs freedom of speech in order to thrive and as Christians we should be secure enough in our beliefs to handle the inevitable criticism, sarcasm and insults that will come our way. As my friend Dave said on Facebook:

The gospel thrives on freedom of speech – even when free speech is used to attack the gospel. Christians are secure about that, God can look after himself. This kind of Islam is not faith but insecurity – apparently, there ‘god’ cannot handle criticism and needs craven thugs to do his killing for him.#jesuischarlie

There is a temptation to say that this attack has nothing to do with Islam. After all a number of Muslim leaders have spoken out against the attack. However, we cannot deny that there is a religious aspect to this event and to others like it. That being said, Christians need to face up to the fact that there have been some horrific events committed or covered up in the name of Christ.

This is important. However much moderate Muslims might decry these attacks and however much I would want to be disassociated from the various child-abuse scandals that have hit the church; from the outside, these are seen as religiously motivated. It only took an hour or so after the attack on the offices of Charlie Hebdo for some commentators to say that all religions are the same, all religions are violent and all religions should be banned. The irony of responding to an attack on free-speech by calling for a ban on religion seems to have escaped some people.

The point is that for much of the time, the wider world does not distinguish between different religions, much less between the different streams of Christianity. We may not like it, but an attack on Parisian newspaper offices by a bunch of Islamic fundamentalists reflects not just on Muslims, but on people of all faiths. The fact that Christianity is often seen to be anti-women, homophobic and generally reactionary plays into this ‘all religions are the same, all religions are violent’ narrative.

I’m not sure what the answer is. Part of the solution must be for the church to be a life-affirming, counter-cultural and peaceful community which does not fit the stereotype of religion in our society. There is a diversity of views on issues such as the role of women and gay marriage, but these must not be the things that distinguish us. I don’t know how many times I’ve heard people say that real Christianity is not a religion its a relationship with Christ. Well if that’s the case, we need to start living as though it were true and not being quite so religious.

We also need to stand up for free speech; to stand up for the right of people to insult us and for our right to offend them. To that end, I’ll post a few of the excellent cartoons which have appeared in the wake of yesterday’s events below.

Just one more thought; in some ways, freedom of speech is an illusion. We are all caged in by our fallen nature and we are not capable of true freedom of action or expression as long as we are alienated from the one who created us. Ultimately, free speech only belongs to those who have found the liberating truth of Christ. 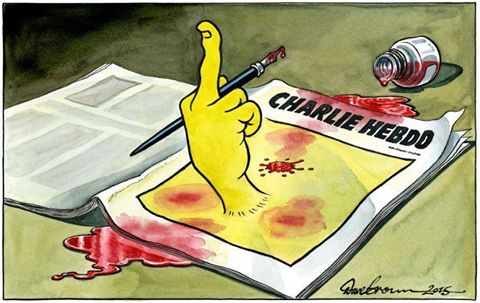 The featured image which appears on the home page for this post and on Facebook is by Dave Walker. The original can be found here.

RT @kouya: Je Suis Charlie: Some thoughts on the right to offend and to be offended … http://t.co/gDAlN3rWST

I’m not sure what it means to be ‘less religious’. I’ve always taken it to mean less bothered about ritual observance. One thing’s for sure – Jesus was not too keen on people who say, “Lord, Lord” but do not demonstrate it in their behaviour.

D’accord! Especially on your final point. I do wonder, however, how the concept of free speech would have gone down in an Old Testament theocracy (e.g. death penalty for violation of 4th commandment)! Has the NT superseded this, or is it merely restated in a more nuanced fashion? Will there be free speech – satire even – in heaven!?

That’s the 3rd commandment; and, among 1st Century Jews, everyone was expected to live by a Theocracy to preserve the integrity of the people. It has always been the stance of Christianity that soley Christians are accountable to each other in their community (1 Corinthians 6) and that a “Christian” who bears the Name in an unworthy way (by claiming to be “of the L-rd”, but not demonstrating His sovereignty over their lives) should be shunned, but an unbeliever is not expected to know any better (1 Corinthians 5:9-13) The moral standard of Christianity is for Christians. It is impossible for the world to keep. That said, it is in poor taste to lampoon people’s religious views, but both Christianity and Judaism–historically, at least– embraced respectful open cristicism and discussion (Acts 5:39) We should too.

I don’t think that the NT (or even the post-exile OT?) envisages a theocracy. The Psalmists wondered how to sing the Lord’s song in a strange land and both Paul and John wrestled with how Christians should live in a system which was profoundly anti-Christian. I don’t see them suggesting a Christendom type of solution to the problem. I suspect there will be free-speech in eternity. Indeed we will know a freedom to express ourselves which goes beyond our wildest dreams. Unconstrained by sin, jealousy and the desire to make an impression on others, we will be truly free!

Thanks Eddie. I found that really helpful!

RT @kouya: Je Suis Charlie: Some thoughts on the right to offend and to be offended … http://t.co/gDAlN3rWST

Agree. Among the population at large there should be some sensitivity about not being unnecessarily offensive about other people’s beliefs, because that often takes place in a context of deliberately seeking to mock and hurt private individuals.
However, within a democratic society there is a role for
satirical publications that will often make particular sectors of the
population wince but are a healthy expression of our God-given ability to
think, evaluate, decide, and to present points of view in a humorous way which
is sometimes more effective in opening people’s eyes than serious articles
about the evils of fundamentalist Islam, for example . I
wonder how many evils have been exposed over the centuries by this means. As soon as we try to exclude or protect a
certain belief, certain kinds of behaviour, etc, from such satire, we are on a
slippery slope.
There is a constant stream of mockery of the
Christian faith in the media, some of which is very offensive to Christians,
and I personally think it is right at times to express our objections to a
specific item. It’s right to wince at,
or to be grieved by, some gross blasphemy, or misrepresentation of our
faith. But there’s a vast gulf between
that reaction and the murder of people we disagree with. I’m sure Charlie-Hebdo
published a lot of cartoons etc which many of us would strongly disapprove of,
but I would still defend their right to do so. What has just happened in Paris should be condemned absolutely and
wholeheartedly, without any caveats.

@kouya Thank you Eddie for your thoughts, very helpful.

Don’t know if there are any current songs of pleading/intercession, crying out to God, but this one from 25yrs ago nails it v prophetically….. O Lord, dark powers are poised to flood Our streets with hate and fear
We must awaken! O Lord, let love reclaim the lives
That sin would sweep away And let your kingdom come https://www.youtube.com/watch?v=6CRqpMaNbJg

Thanks for this, Eddie.