In the early 1980s, Sue and I felt that God was calling us into mission work in a French speaking country. For us, this naturally meant something, somewhere in Europe; Bible translation in Africa was the last thing on our minds. Over a period of many months we sought advice from the leaders of our church and other people we respected. We wrote to a number of different missionary organisations who worked in Europe and had a couple of interviews; but nothing seemed to work. It was all rather frustrating. Around this time, some friends suggested that we should visit Wycliffe Bible translators to see what they could offer us. To be honest, I thought this was a crazy idea, but Sue, who is a linguist by training, was quite attracted by the thought – so we went along. Over the space of one weekend, God turned our lives around completely. It turned out that my background as a research scientist was just as useful for a Bible translator as Sue’s linguistic ability. Not only that, but Wycliffe had urgent need for people to work in French speaking Africa. All of the pieces fell into place; our calling to a French speaking country and our academic background suddenly made perfect sense. Thankfully, our Church leadership thought the same thing.

A little over four years after our first contact with Wycliffe, equipped with some of the best practical linguistics training in the world, we moved into a Kouya village in Ivory Coast, West Africa. The Kouya are a hardy, strongly independent people who live in twelve villages on the edge of a dense rain forest. At the time we settled into the village of Gouabafla, there was a handful of Christians in each of the Kouya villages, though the vast majority of them had been believers for less than five years. We became part of a first generation church; it was like living in the book of Acts!

The Kouya area is home to a number of different people groups, but non-Kouyas seem to find it almost impossible to learn to speak Kouya. Because of this, most Kouyas speak at least three or four other African languages fluently in addition to French, which they learn at school. It is hardly surprising that when we turned up in the village and said that we were going to learn to speak Kouya, that people were extremely sceptical. If Africans who had grown up in the area didn’t manage to learn it, how could a couple of white, outsiders expect to. 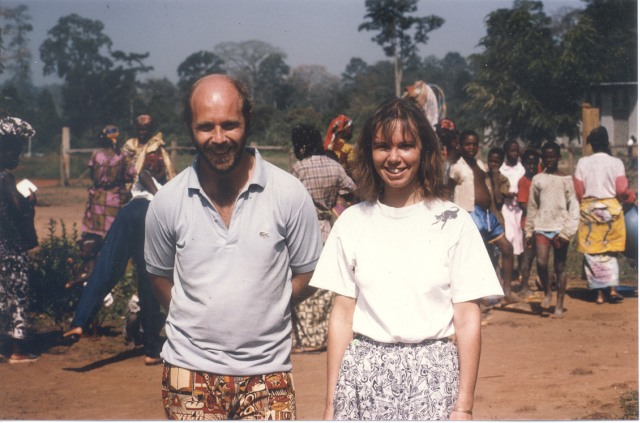 I’ve never done anything as difficult in my life. Intellectually, getting my head around a whole new way of thinking and a completly new vocabulary was a huge challenge, but it was the least of my problems. The really difficult thing was going out every day to talk to people knowing that I was making a complete and utter fool of myself. It really isn’t easy being laughed at every day. What’s worse, I found myself thinking some rather unpleasant things. “How dare they laugh at me? I’ve left my nice comfortable home in England to come and help them – they should be grateful.” “Do they realise who they are laughing at? I’ve got a university degree and tons of other qualifications, they are just cocoa farmers.” I’d come to share Jesus with the Kouya, but there were times when my attitudes and thoughts were miles from where Jesus would have wanted them to be. But this is the heart of The Story; God loves men and women so much that he wants them to communicate on his behalf, despite the fact that people are far from perfect. Like all of God’s people, I have a whole series of weaknesses and failings; which makes it all the more bizarre that I would look down on anyone!

It took two years of hard work before we became at all comfortable speaking Kouya, and even then it remained a huge struggle to say things in a way that people would understand what we were going on about. But there is nothing in the world to compare to the thrill of being accepted into a community that is completely different to your own. We used to love the expression on people’s faces when they would realise that we were speaking Kouya rather than French. Complete strangers would stop in market and say “aya, the world has changed, the toubabs (white people) are speaking Kouya”. We became something of a tourist attraction in our village. When family members or friends came from elsewhere in the region, they would be brought to our house to meet the tame Europeans who could speak Kouya. It was hilarious! Mind you, not every one was pleased to see us. There were some people who were very suspicious of our motives. Some thought we were spies and more than one person asked where we kept our radio that we used to report back to our government in Washington: it was hard not to laugh at that one. Others thought that we had come to write a book about the Kouya language that we could sell for a fortune back in our home country. At first we were very defensive about these sorts of accusations, but as we learned more about the Kouya and about the colonial history of the country, we realised that the Kouya had good reason to be suspicious of the motives of Europeans. History wasn’t really on our side. Despite the suspicions that some people harboured, most people were delighted to see us in their village. . The Kouya loved it that people from outside were making the effort to speak their language. They were used to outsiders not even bothering to master the basics, but here was a couple who had come all the way from Europe and who were chatting away in the language. Our being there gave them a sense of value and self-worth. Kouya people would tell us that their language was not a real language  like French; it couldn’t be written down and it didn’t have a grammar. Over time, we were able to help the Kouya to write their language down and we could show them that it didn’t just have a grammar but it had a very complex and elegant grammar that was often far richer than the French they learned at school. They loved that!

It took a further twelve years and input from a team of Kouya and Europeans before the Kouya New Testament was finally ready to be published. During that time, we saw the small church grow in numbers and maturity. I’m not sure how much impact we had personally in the process and I’m absolutely convinced that we learned more from our Kouya brothers and sisters than they learned from us. But there is one thing that was clearly communicated to the Kouya through our presence in their village: God cares for them. They may be a small ethnic group, more or less ignored or unknown by the larger groups around them: but God sent his servants to live amongst them and God speaks their language. I loved it when an elderly Kouya said to me that the Kouya were just as important as the Americans, French or Germans, because God spoke their language, just the same as he did for those others.